The Use of Solar Energy at Burrowing Owl Estate Winery

The sunny Okanagan valley is one of Canada’s best locations for capturing its perpetual, green energy and converting it into either heat or electricity. In 2006 Burrowing Owl installed its first “hot water” solar panels. That clean/green energy system continues to this day as several new investments into photovoltaic (PV = electrical) solar panels have been completed that will produce electrical power efficiently and for no additional cost, for another 35 – 40 years.

In 2006, Burrowing Owl Estate Winery made its first significant investment into renewable solar energy panels to produce hot water, a commodity that wineries use in large quantities for barrel washing and other cellar-related cleansing functions. During the hottest summer months, the hot-water solar panels actually produce an excess of hot water that is “dumped” into our swimming pool to the delight of our Guest House patrons. These hot water solar panels produce the electrical equivalent of 53,100 kWh (kilowatt-hours) annually, and offset CO2 emissions of 27.1 tons (27,500 Kg) annually.

Beginning in 2015, like flat-screen TVs, the price of solar electric panels plummeted as world-wide acceptance of the technology took hold. Perhaps because of the abundance of hydro-electricity in this province, the incentive to move to solar electric alternatives lags far behind the rest of the world, despite the significantly reduced up-front installation cost of recent years.

On the flat roof of the winery’s recent cellar expansion completed in 2017, there is a 3,350 s.f. flat and clear roof. This area is now blanketed with 70 solar panels, each capable of producing 310-watts of electricity.  This 70-panel array produces 25,300 kWh/year, while offsetting approximately 12.9 tons (13,100 Kg) of CO2 emissions annually. 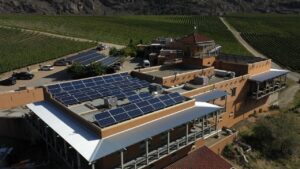 In the centre of the Burrowing Owl parking area is a landscaped “island” with parking for 12 vehicles. During the fall of 2017, the winery designed and installed a custom structure with 108 solar panels to cover these 12 parking spaces. These extremely efficient bi-facial panels provide protection from rain and the intense summer sunshine, while generating 54,000 kWh/year and offsetting CO2 emissions totalling 27.5 tons (27,940 Kgs). 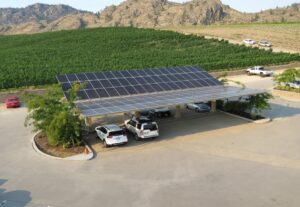 In 2017, a 50-kW system comprised of 160 solar panels was installed on this building‘s south-facing roof that generate about 58,000 kWh/year. Since the solar energy produced is approximately equal to the energy consumed during the year, this facility can claim a “NET-ZERO” carbon footprint, believed to be the first significant building with this level of energy efficiency in British Columbia’s wine industry. The annual carbon offset from these solar panels is 29.6 tons (30,100 Kgs). 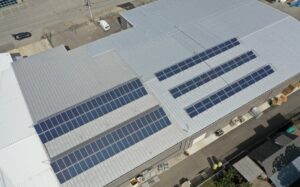 During October 2016, the roofs of the winery’s Osoyoos staff house and the adjacent garage were covered by 116 solar panels rated at 310 W each. The annual production of these panels is 42,000 kWh/year. The average annual electrical usage is also approximately 40,000 kWh annually, making this Burrowing Owl’s second largest NET-ZERO carbon footprint building. The carbon off-set here is 21.4 tons (21,800 Kgs) annually. 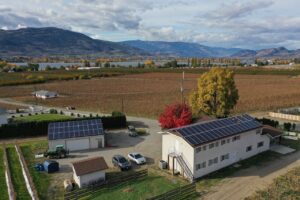 Burrowing Owl strongly supports the use of electrically powered automobiles and in 2017, the winery installed eight (8) charging stations in the parking area for the use of visitors and staff. Four stations have ‘standard’ chargers and four have the Tesla quick chargers. These charging stations are open 24/7 and there is no charge for their use. 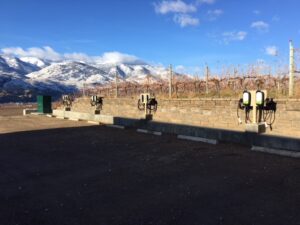 In 2006 Burrowing Owl took its first step into renewable energy with an investment into solar hot water panels, equal to 38 solar electric panels, producing the equivalent of 53,100 kWh/year (*). The second step began in 2016 with the installation of 454 solar electric panels that will produce 180,000 kWh annually of free and clean electrical energy for the next 35-40 years.

By the end of 2017, the total contribution of solar energy at Burrowing Owl from the 492 hot water and PV solar panels will offset carbon emissions by 118.5 tons/year. It is estimated that the solar electricity produced by Burrowing Owl annually would power 22 average homes in BC.

Burrowing Owl is committed to continue its long-term pursuit of overall environmental sustainability.