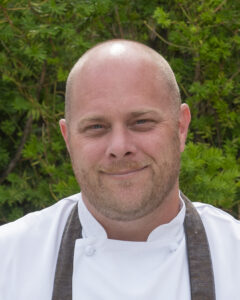 Chef Lee Humphries was born and raised in Cornwall, on the southwestern peninsula of England. He started his culinary venture at the upscale Budock Vean Golf and Country House on the banks of the Helford River where he spent the time working, observing and learning everything he could. Lee then voyaged to London where he worked at the Westbury Hotel in Mayfair as a commis chef, cooking through the ranks and eventually holding the Sous Chef position. In 2000, Lee moved to Vancouver, Canada and spent 15 years cooking at some of Vancouver’s top restaurants including West, Opus Hotel, C and the Heather Hospitality Group. In 2015, Chef Humphries found his true home at the Sonora Room Restaurant in the South Okanagan wine country, where his passion for fresh, seasonal, local ingredients supports and inspires his food and cooking philosophy.